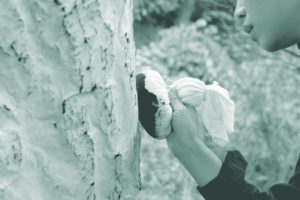 “The show was a lot to carry, in a literal way. Have you seen all these stones?” Jeewi Lee starts our conversation by talking about the monumental piece she installed at Sexauer for her solo show ‘Inzision’. The black and white stones in the exhibition space are set up as the 38th parallel north, referring to the border between North and South Korea. Within her work, Lee takes personal and historical traces as points of view, while triggering imagination. We talked with Lee about her fascination with traces and her role as an artist in activating participation.

In your current show at Sexauer you are focussing on the country in which you were born – Korea. Is it the first time that you focus on your personal heritage in your work?

Jeewi Lee: It is not the first work in which I am dealing with a tradition or history from Korea. I have a background in painting, which I studied at UDK. There, it was always very important to work with your background. My work is mainly conceptual: from room installations, to images, to interventions in the city. Each medium is in some way linked to my background, albeit in very minimalistic and abstract terms. One of the most often recurring themes in my practice is that I am working with traces. I am very interested in absence and being present, in leftovers and traces as an index of something.

Where does your fascination with working with traces come from?

JL: I think it developed out of my stay in New York – I spent almost a year there, at Hunter College. Before arriving, I was focussing on patterns, camouflaging and mimicry, which are closely linked to my biography. I was born in South Korea, but when I was about 5 years old I moved to Germany with my parents, who are also artists. When I was 10 years old, I moved back to Korea, where we continued to move every second or third year. I had to constantly change my school, my surroundings, et cetera. When I was about 17 years old, I came back to Germany and entered a boarding school, after which I lived in Belfast and then settled in Berlin. I was changing my home environment quite a lot; as a kid it was hard because you are always looking for a certain identity, community, and a place to belong to. The good thing was that I became highly interested in the influence of the environment on the individual. That’s where the idea of working with camouflage came from. After having lived in Germany for a while, I moved to New York. I was shocked by the diversity – all of these different nationalities. I was always the ‘extra wurst’, wherever I was. But in New York, everyone had crazy stories and mine weren’t that different. Then, somehow my practice shifted 180 degrees. I was always interested in the influence of the surroundings on the individual, but then I asked myself: what influence does an individual have on their surroundings? This is when I started to work with traces.

Can you tell us more about your current solo show, ‘Inzision’, at Sexauer and how this relates to traces of the North and South Korean border?

JL:The history of Korea is a complex one. After Korea was colonised by Japan, the Soviet Union and US Americans came to divide it into two occupation zones. They influenced Korea a lot with their political positions. It was the beginning of the Korean tragedy, which is still persisting nowadays. The border became the most firmly closed of our century — nobody thought at that time it would last so long. The border decision was made over night and set as a 38th parallel north border. 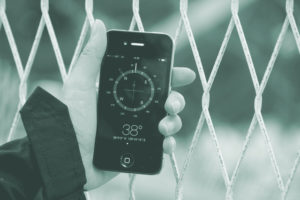 For my solo exhibition at Sexauer, I am showing a room-filled installation. The floor piece is called ‘fraktur’ – the German translation of the medical term for a bone fracture. I used little black and white broken stones and divided the room into two fields. One half is covered with white stones and the other half black. The broken stones can be seen as a metaphor for soil, but also for individual humans. The idea is to see how visitors deal with the border situation. If you walk through the exhibition space, the stones will move and eventually break the border. I want the visitor to intervene with the space. A line or border can be received quite passively; some people just accept the line and try to keep it the way it is. To me, this also tells a lot about our society.

Next to the floor piece you are also showing five prints that are made with an ancient Asian technique. Can you tell us more about the process behind those works?

JL:The technique I am using for the five prints hanging on one side of the room is called Takbon, which is an ancient and traditional Asian print technique from the fifth century. They originally developed it to make copies of gravestones. I used it to make prints of the trees that are standing on the original North and South Korean border.

To follow the traces of Korean history along the 38th parallel north, I divided the 38th parallel into ten equal points. I found out that five out of ten points were based in South Korea and the other five in North Korea. As a South Korean citizen, I am not allowed to travel to North Korea. It became part of my concept that the other half is missing. I researched the coordinates of these five points and took several trips from the east coast to the west, to make prints of the trees standing on those points. Trees, to me, are also witnesses to history. Therefore, I chose very old trees that had already been there before the border division. 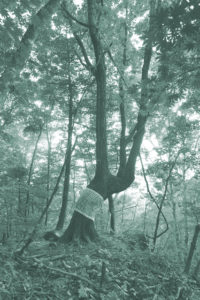 Trees are often a metaphor for life and personification. Trees are anchored to the ground by their roots and thus bound to their environment. They cannot escape if they are having a hard time, so they become observers of the fate of the locations to which they are bound. Looking at the way that trees grow, you can find out in what kind of environment they have lived. I wanted to document that by using a traditional Asian technique. The prints of the five trees aren’t hanging in the exhibition space in a classical way. I chose to present them only on the right half of the room, because I want to leave the left side for the missing North Korean ones. To me, this is also about a balance; the white part is the part being filled.

Your work quite often takes a performative approach, without being performance per se. In your previous show at Sexauer, ‘Blinder Beifall’, you invited people to witness something that already took place. I also see this as a matter of inviting and excluding people. Can you tell us more about the thoughts behind this work?

JL: In my last solo exhibition at Sexauer, I built a ten-meter-wide white arena filled with sand. People were really lost when entering the room, because they saw the stage and expected something to happen. They were getting nervous, questioning whether they were too late. The work forced them to look carefully, because there was a lot to be seen in the sand; there was camel hair, there were llama footprints, and more. But everyone was so impatient. At some point, people realised that nothing would happen and only then they started to look at the work more carefully. Suddenly, they started to see the prints and this is when their imagination was activated. Of course, my work had a critical aspect in letting visitors miss what had happened in the arena – which was a circus show – but I was also interested in creating a situation by leaving some room for the viewer’s own imagination. I received so much interesting feedback. People told me that when they got home they were still thinking about the piece and were asking themselves about the message of letting visitors miss out on something.

I feel that it is not about excluding, but about giving the audience space for imagination. In traditional Asian paintings, you treat the emptiness – the white space of the paper – as equal to the space that holds content. Whereas in Western society, it is just leftover space, outside of the painted area. I am very inspired by that. What I find interesting is that traces are very minimalistic and abstract in their form, but on the inside they also retain so many narratives. The tension between these two poles – having a great story to tell, but in a very reduced form – is very important to me, because it leaves space for imagination. I use the traces as pictorial elements; most of my images look like paintings, though they actually aren’t. This also functions to question the medium of painting. Is it only painting if you fill an empty canvas? I really want to sharpen people’s perception – to awaken certain senses and encourage them to reflect on their everyday lives. I think my work allows people the space to think and to fill in the ‘emptiness’ with their imagination. 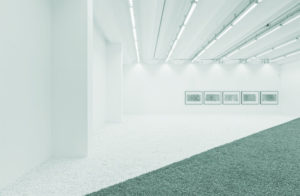