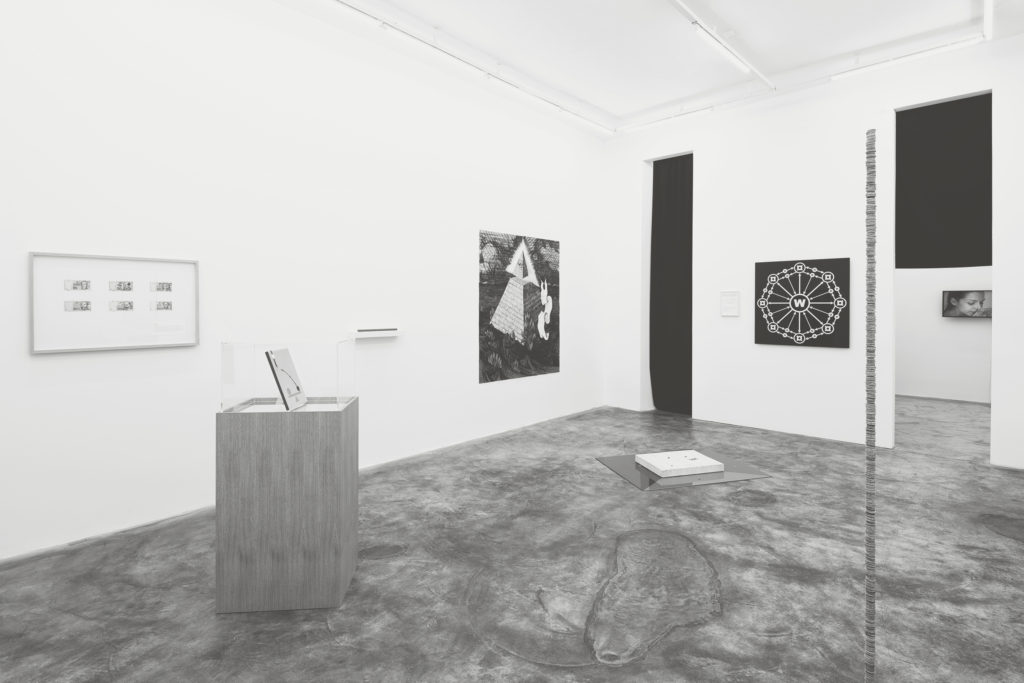 The interplay between fiction and reality, the abstract and the concrete, and community and individuality that comes across in ₡ U R ₹ € ₦ ₢ ¥ – the current exhibition at Nome Gallery – underlies not only the relationship between money and art, but also the relationship between money and identity, or art and identity. The connection this draws to the entity that is Lucie Fontaine was previously acknowledged in an earlier exhibition of yours, “Soft Shock”, concerning Bitcoin – a precursor to ₡ U R ₹ € ₦ ₢ ¥. How would you describe your particular relationship to currency – itself comprising a set of underlying structures?

Lucie Fontaine: As you anticipated in your question, the desire to organize a group exhibition with existing artworks by contemporary artists dealing with the notion of currency, through money but not only, is deeply connected to issues that are dear to me and my employees, from the fabrication of identity to the ever more invisible division between fiction and reality; from individuality versus multiplicity (a word I favor over “community”) to the role of pseudonymity – which is slightly, but deeply, different from anonymity – in today’s communication and interaction, which brings back “Soft Shock”, the exhibition I organized around issues connected to Bitcoins. In other words, yes this is my particular relationship to “the current” (= currency), which gives me energy (current) in order to empower the underlying structures within my modus operandi, which I call “art employment” – avoiding any specific role (artist, curator, writer, editor, gallerist, collector, etc.) – solely driven by the relationship with my (art) employees.

A number of works in the exhibition focus on the materiality of money in its physical relationship to us – Ana Prvački’s video work and Navid Nuur’s Hyped by History, Hypnotized by Memory, for example – as well as something inherent to the exchange of its value, yet, at the same time, as wholly distinct and separable from it – Stolen Pound by David Rickard and The New 25 by Miri Segal come to mind here. In considering money, or currency, as a metaphor for structures in the art world, what, for you, do such works suggest about the nature of value in terms of art and art making in the contemporary context?

LF: It would be very reductive and somehow patronizing if I was going to give a clear answer on what these works suggest, especially in regard to the field of art and all the games that are happening “in the field” and very often governed by (unwritten) rules. However I definitely feel this exhibition, albeit small and modest, can be seen as a sort of metaphor, or parody (a word very dear to David Robbins, an artist I truly admire) for beautiful and horrible things that are happening every day in “the jungle” (the art field) at the expense of its animals (again: artist, curator, writer, editor, gallerist, collector, etc.). 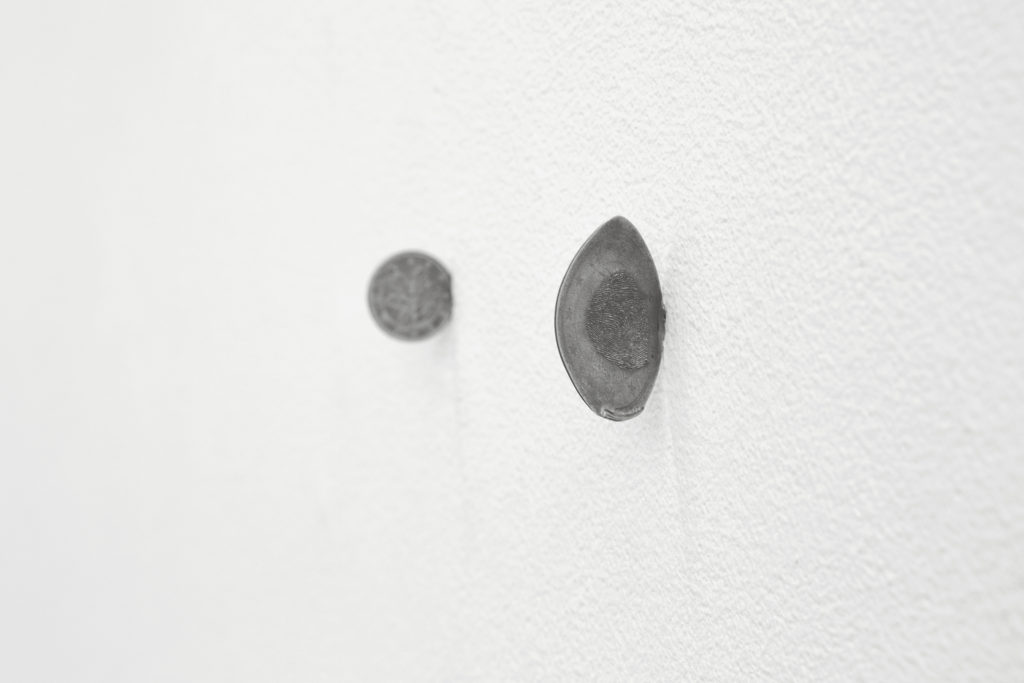 NAVID NUUR, Hyped by History, Hypnotized by Memory, 1976-2019. Two 5 Euro cents coins, one pressed with the fingerprint of the artist. Photo by Gianmarco Bresadola.

History of Painting II by Jan Tichy is interesting in that it does not make a direct reference to currency – only through the concept’s inverse: the medium’s obsolescence – but it does explicitly consider art itself (its history) from a particular lens. Perhaps you can talk a bit about this work and the notion of obsolescence that is being explored within this context.

LF: It’s interesting that you see Jan’s work as less direct. For me it is actually one of the most direct ones, because through the celebration of obsolescence he actually sheds light on core issues connected to the notion of currency, specifically in connection to art. In other words he highlights the negative in order to bring up the positive and I am using all these metaphors – “shed light”, “positive”, “negative” – to celebrate Jan’s practice and his roots in the medium of photography, which also went, itself, through many phases of currency. To be, this time, quite direct: only art that is deeply aware of its possible obsolescence can in fact become the most current of all.

How would you describe your role as ‘art employer’ in the making of ₡ U R ₹ € ₦ ₢ ¥ at Nome Gallery, and more broadly? What is the nature of your relationship to your employees and the participating artists?

LF: As I was mentioning before, all I do, my labor, goes through the notion of “employment” which defines labor without specifying what kind of labor. The process behind this exhibition follows previous examples. An invitation comes to me, either directly to me or to one of my employees. Through this invitation the “inviter” is automatically, although often unconsciously, employing himself or herself (we live in the age of self-employment after all!) and becomes partner in crime in this endeavor. My work is often originated by three kinds of movement: the first one is when I am the inviter, which happened when I had a space in Milan, in Tokyo or currently in Bali (Kayu, my branch in Indonesia); the second one is when I am the invited, as it happens when I show artworks made by myself and my employees. I am soon presenting a show called “Credenze & Motivi” (credenze means both dining room sideboard cupboard or beliefs, while motivi means both motifs and reasons) at Galeria Sabot in Cluj-Napoca; the third one, as it is for this show, is when I am both invited and inviter, which means I use my invitation in order to invite – a sort of chain letter.

Lastly, can you tell us a bit about how Lucie Fontaine, ‘art employer’, was conceived?

LF: I was conceived (and born) in Colmar, France. Some people say I am just the little (and less successful) sister of Claire Fontaine (Pop Music has so many examples, from Solange Knowles to Jamie Lynn Spears; some people say my genitalia looks like Lucie Fontana’s cu(n)ts; some people say I’m simply a fountain of light… 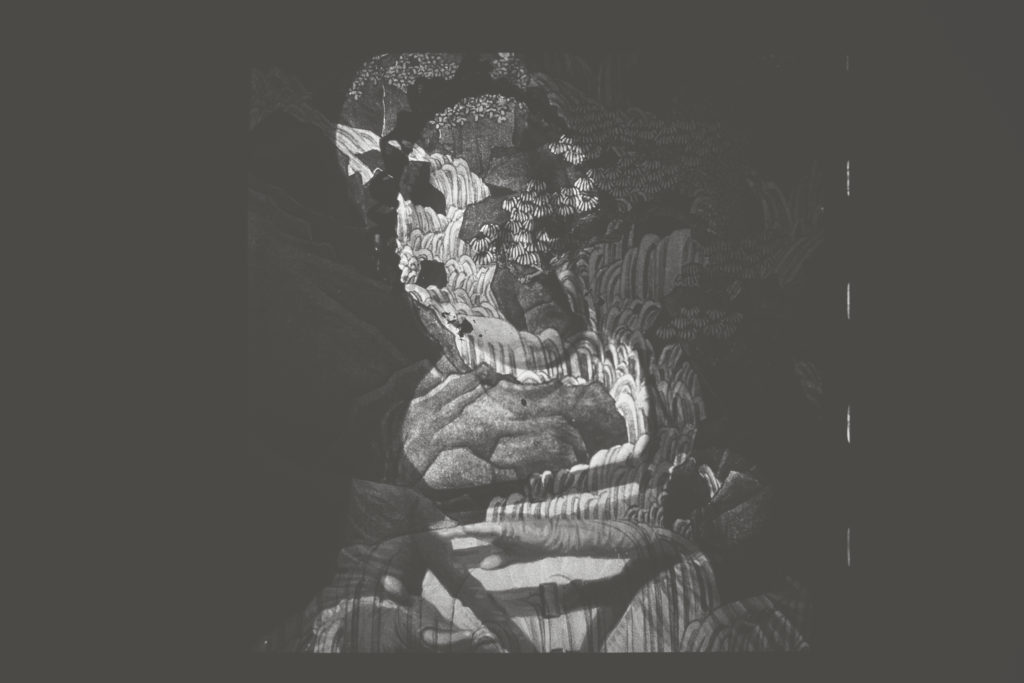 JAN TICHY, History of Painting II., 2019. Mixed media on forty 35 mm color diapositives from the discarded diapositives collection of the Art Institute of Chicago displayed on a slide projector on continuous loop. Photo by Gianmarco Bresadola.