Louise Guerra (2013-2017) was a collective project: a fiction fabricated as a counter narrative to the individualistic, capitalistic tendencies within the art world – though not limited to it. The life of the pluralistic artist, Louise Guerra, unfolded through a non-linear network of texts, exhibitions and events. Working against prevailing modes of authorship, biography and identity, the project has since transitioned into the Louise Guerra Archive (LGA), which is maintained by Kathrin Siegrist and Chantal Küng. LGA persists in Louise’s initial pursuits, while shifting its focus towards the upkeep and authorship of an archive – namely, the artist’s estate. In this way, Louise Guerra’s existence, and afterlife, not only illuminate the collectivity underlying a single entity – both in terms of the notion of self, as well as the various roles undertaken within the art world – but also work to disassemble common signifiers of identity (names, clothes, biographies, work, etc.) in order to visualize the fluidity inherent to their formulation.

Within the frame of our branding the art world issue, we spoke with the Louise Guerra Archive about the impetus for the project within the frame of the contemporary art world, what it means to rethink the singularity of (the artist’s) identity, and positioning the archive as artwork.

What can you say about the artistic fiction behind Louise Guerra – the process of fabrication, its initiation – and the ways in which it is placed in dialogue with the concept of the (artist’s) biography as a linear narrative?

Louise Guerra emerged out of a feeling of necessity. It was a strong belief in togetherness, in caring for each other, in collaboration, in interdependency, which led to the foundation of Louise Guerra as a concept and as a mode of practice. Louise Guerra was conceptually and practically based on qualities that are not acknowledged as much as we wish them to be by our current state of (western) societies. This focus on the capability – or even competitiveness – of the individual and this kind of self-hood as a distinct entity dominates not only the art world. In fact, Louise Guerra can be read as a counter narrative to common artist biographies, or even as a systemic comment.

In chapter 12 “ANTIBIOGRAFI”, to mention a work example, Louise Guerra interweaves various stories from the life of historical Louises in order to point out the paradox of a “biography” as a linear narrative, from which explanations are drawn for an artistic work by a “singular being”. (see image above)

What about the artist’s name – the process of naming itself, in terms of thinking about identity, in particular?

Names are used for identification. “Louise Guerra” refers on the one hand to a specific entity, an individuum, a person’s name. On the other hand, she is pluralistic, since many and various participants have been contributing to her existence. Therefore, Louise is a collective singular, like a herd or a swarm. The concept of Louise Guerra is based on a simple shift.

And it’s a game with identity, of course: saying many can be one and one can be many. Again, let’s rethink the “I” as a category. Here, an excerpt from chapter 11, How To High Five Fly Dive:

smell of my name and I`m already gone. You should not believe the hype. Stay true. B U. Rock it away. First female war journalist. First female architect. Nobel Nobel prize winner of literature. I was born in 2013.

your commons well. I`m dead before you. Take it away. Feminist feminist, George Sand-lookalike, pamphlets in my name.

Forrest Gump Run. Oh let`s get drunk. Funk! Up on the lunch sun.

Punk I was a young gun.
Sunk I chose to fuck done.

I was born in 2013.
I have never overthrown not a thought of history.”

How did Louise Guerra evolve over the course of her existence?

The structure of her evolvement is based on chapters (Chapter 1-20, with a preface). Every chapter emerged on a specific occasion — an invitation for an exhibition, for a performance, or such — and involved various people. LG came into existence in 2013 and she ended in 2017. In 2018, the Louise Guerra Archive was founded, which now serves as a new mode of authorship. 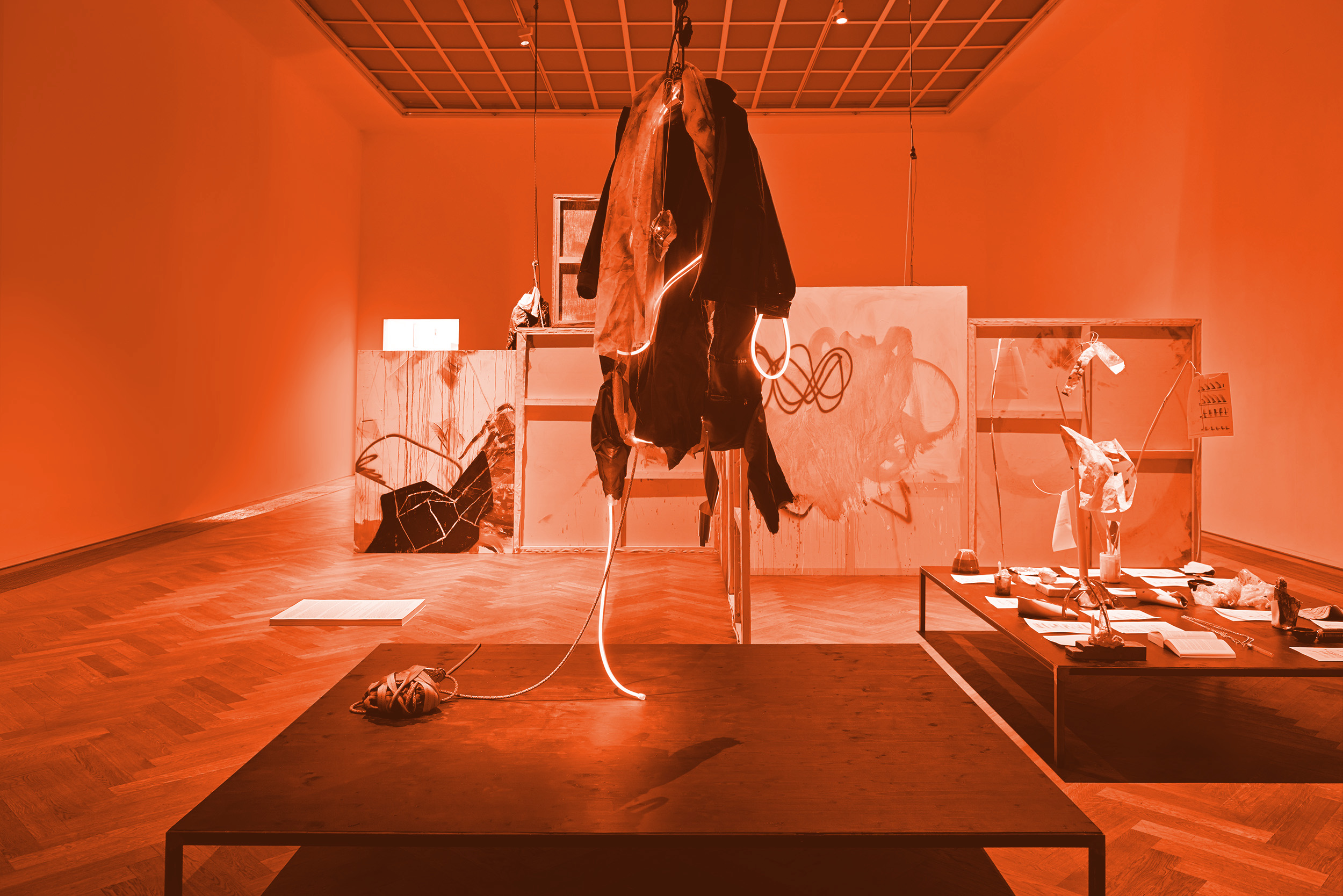 Could you talk about the decision to initiate and build an archive? As well as what it means to care for and maintain this particular one?

The idea of founding the Louise Guerra Archive came up in the process of development of an exhibition concept for a LG retrospective in the Kunstmuseum Bern in 2018. Thinking along the logic of Louise Guerra, we turned the notion of retrospective into “Futurespectives,” which later also became the title of the work by LGA in that show.

We transformed the authorship into Louise Guerra Archive: There is now an open access online archive, as well as a physical archive containing Louise’s works, documents and life relicts. Conceptually, the idea of this transformation is consistent and even more radical as far as LG’s original idea is concerned. Now, we are challenged by new questions, amongst them: what does it mean to be an artist-as-archivist? How is an archive cared for? What do you do with an artist’s estate? Who authors the archive and why?

Elaborating on that: What is the role of the archive within the context of the work of Louise Guerra? It has also been referred to as a living archive, implying that it undergoes a process of change and/or expansion – I wondered in what ways this manifests, as well as how this notion of a living archive might perhaps run in counter to the so-called “death drive” – in essence, the idea that the impetus to create records is embedded in the impulse to erase memory (Jacques Derrida, Archive Fever)? Perhaps it isn’t entirely – or at all – counter to it…

The Louise Guerra Archive (LGA) is intended as a living archive, which cannot only be activated and received; it changes and expands itself in and with these surveys, re-enactments and further developments. Thus, the artists, mediators, curators, archivists and everybody else who works on the updates, become part of the archive and the historiography of Louise Guerra. This is not new; it only means a rethinking that addresses the authorship and involvement of the various actors in the production of history. The LGA is also an archive-as-artwork; archiving becomes an artistic practice, which in its reformulation of meaning, evaluation, structure and coherence questions the archive as an organizing and prescribing institution.

The revival of almost extinguished or forgotten existences was a relevant aspect and there is certainly still much to do, in order to take it as far as possible. To get back to your question: With LGA, as with LG, life and death are not thought of in a dualistic principle. With a sense of constantly becoming, the afterlife is another form of creation. What interests us are acts of transmission, embodied knowledge, and the realities of fiction, as well as the fictions of realities. And, of course, this experience of a constructed form of life / afterlife. What was life?

And are there any upcoming developments planned for LGA?

The next activation of the Louise Guerra Archive will take place this autumn on the occasion of an exhibition at “der Tank”, an exhibition space by the art institute in Basel.

It is envisioned as a collaboration with students and artists who are taking up the LG research practice, on the one hand; and on the other hand, they are performing in Louise’s dresses. Clothing – as items worn on the body, they can be referred to as a second skin – has been a reoccurring artistic media by LG. On this occasion, we will examine possibilities to dress in Louise’s clothes and to let Louise live on…