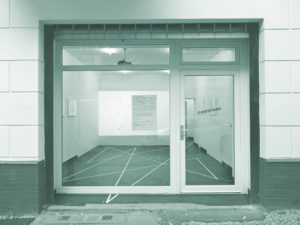 In her exhibition at Centrum, unfolding a visually spare and still, yet complexly layered environment, Emma Waltraud Howes’s role as translator and mediator is visualized. Absent of a staged performance, The Nine Returns to the One lays bare the intricacies and interrelations underlying and arising from it – taking the form of a collaborative field to be activated by the collective orchestration of an event.

Approaching Centrum’s storefront window, visitors and passersby are beckoned by the number one – indicating the starting position of the floor-plan within – which extends out of the space and onto the sidewalk. Entrance, in this way, is troubled and must already be negotiated, as the starting point does not align with the front door. Instead, visitors are positioned in front of the large window, in order to direct attention to a large sheet of paper taped to it at eye level. Before entering the space, Howes propositions us with a written agreement laying out the roles and expectations for the parties involved – visitors, artwork, performers, and institution – effectively solidifying social relations within the space. The document, titled Tether for an Engagement, takes care to demarcate these boundaries in an effort to foster reciprocity and the smooth unfolding of the ‘collective encounter’. 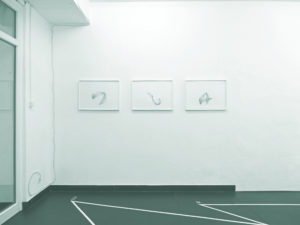 The environment Howes has introduced into the space is a contemplative one. ‘Flight patterns’ abstracted and distilled to gradated graphite forms hang on the walls to the right and left of the space. These are notations delineating the formations followed by each of three performers, visually manifested on layers of semi-transparent white paper as an accumulation of iterations. The guest score – unfurling a repeating circuit from numbers one through nine – is composed of white lines on an absorptive black floor, filling the space, as a color-inverted image of the same is projected onto the front wall. This repeated notation – the guide for guests to follow as they move through the space – maps out not only the flow of movement, but also the points of rest (marked ‘observation huts’). A soundtrack, meanwhile, emits a composition comprising the sounds of sparrows in varying frequencies and degrees of manipulation, translated from the graphic scores. The high-pitched piercing of elongated sounds – described by Howes as almost akin to a sword slash – disrupt the feeling of tranquility and usher in a hostile, almost confrontational element. A similar sentiment also underlies the floor grid, which makes reference to Chinese martial arts – namely the laying out of strategic positions that offer a panoptic view, facilitating self defense.

As the performance has previously played out, spectators are invited in, not as passive viewers, but as active bodies that are compelled to negotiate the space, the performers and other audience members in order to simultaneously watch and participate in the work’s unfolding. Following their own, overlapping scores, the boundaries between performers and audience are broken down, both visually and physically. Referred to as ‘flight patterns’ by Howes in reference to the migration of birds and carried out against the backdrop of sparrow sounds, the movements of participants come to resemble that of a flock. In Centrum, the ‘guest score’ and adjacent performer scores remain an open invitation for the impromptu activation of visitors.

Perceiving dance, and motions of the body more broadly, as language, not only enabling us to communicate but also drawing from our embodied experiences and histories, Howes constitutes a space for translation through disparate, though intersecting, forms and changing positionality. It’s a space in which we are prompted to recognize and welcome another’s position in relation to ours, as well as to reevaluate our own, finding ways of moving in tandem harmoniously through systems of mutual recognition. The linguistic migration that is enacted between bodies, media and forms in space makes borders tangible, while simultaneously demonstrating their fluidity. The persistent negotiation that ensues materializes clearly articulated structures, which are nonetheless susceptible to endless reconfigurations through the interaction of patterns – both individual and collective. 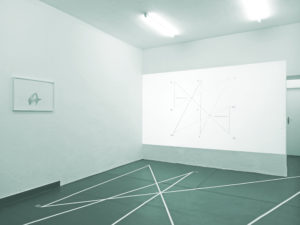 Installation images: Emma Waltraud Howes, The Nine Returns to the One at Centrum. Courtesy the artist and Centrum.
< previous article
next article >
To change your privacy setting, e.g. granting or withdrawing consent, click here: Settings