As a follow-up to last year’s on hospitality issue, textur attended an evening devoted to small talk – part of INTERIORS TO BEING, within the frame of their HOSTING chapter. INTERIORS TO BEING is a month-long program of communal happenings in public and private spaces in Berlin. Chapter #5: HOSTING was curated by Pauline Doutreluingne; Small Talks was initiated by artist Ella Ziegler and held in a private garden in Mitte. Here are some notes from the event…

Upon entry each guest was prompted to select a slip of paper from a box. They were printed with a single question: Do you know a good restaurant nearby? Do you prefer to take holidays on the beach or in the city? We were then told to ask our question to as many other guests as possible over the course of the evening. Nice idea and also thematically fitting, but, personally, “icebreakers” have always filled me with dread.

A few steps into the garden, I was already confronted with the first question of the evening. A woman, chaining up her bicycle, nonchalantly said: “Hi. Do you like my dress?” Not putting the pieces together immediately, I was at first confused, then slightly panicked. Oh no, someone’s talking to me. After taking a second to register and realize this was one of the questions from the box, I replied, “yes, it’s very nice.” 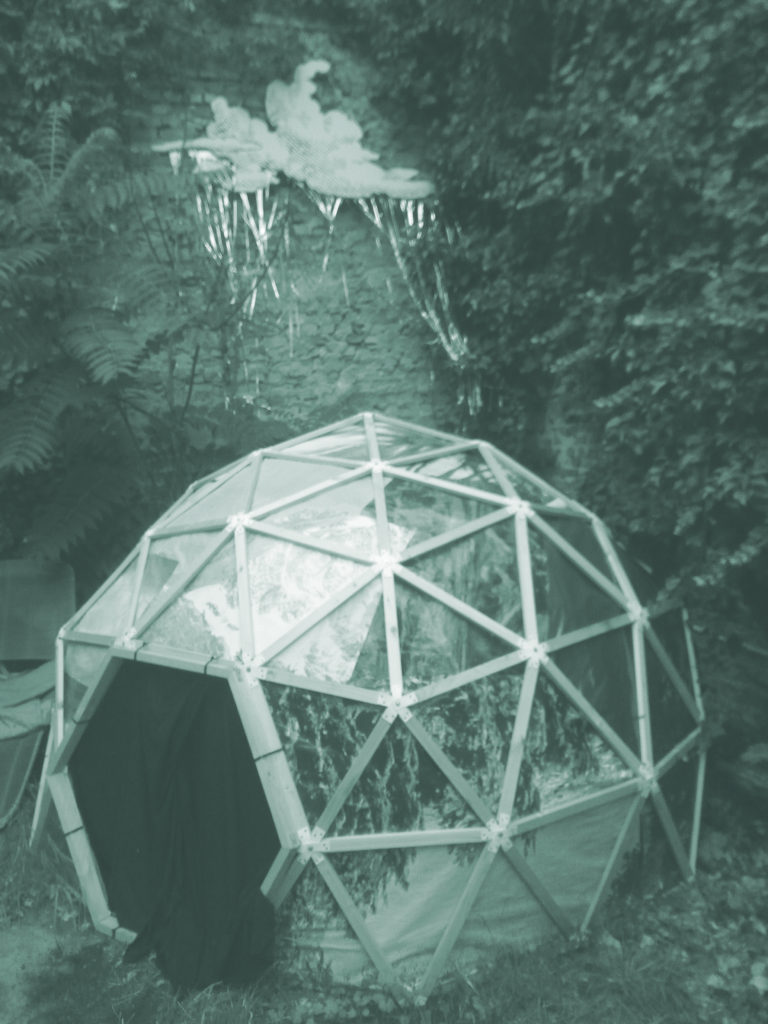 “Fat-burner Noosphere Shitshow” installation in the garden by Hannah Dougherty for HOSTING.

The realization that this interaction was orchestrated as part of the event made me reflect on my initial response to being asked an unexpected question by someone I didn’t know. I might not have given it a second thought, but in this context, I was struck by my own internal response – the hidden desire to flee from an unanticipated interaction. This, plus the fact that I was not so successful in asking my question during the rest of the evening, highlighted my own feelings and relationship to small talk rather vividly.

The program of the evening featured a small group of artists and curators presenting and discussing small talk as a mode of engaging with one another, its utility and significance, cultural differences that inform our approach, and the ways we perceive and talk about it. The evening was casual, convivial, and intimate, with stories, opinions and personal anecdotes shared.

A humorous text written by Mark Emblem and read by Matthew Burbidge plotted both sides of an interaction composed of stitched-together bits of small talk. The meandering, often one-line statements wove a thread of mundaneness, dead ends, pauses and non-starters, wherein morsels of information were also delivered, shared, and at times dispassionately questioned. With sequences of “that’s cool” followed by “yeah”, it was painfully relatable – eliciting knowing laughter from the audience – while illuminating the rhythmic choreography of back-and-forth conversation, its inherent musicality.

Throughout the evening fresh pizzas were being prepared and cooked in a small oven in the corner of the garden by musician and vegan cook Paulinhx. As smoke piped out of the chimney – casting its net over the group, gathering us up – the atmosphere was set for the sharing of food, opening up encounters. These were sometimes wordless, through gestures, by simply asking for a slice to be passed, or via whispered appreciations: “Toll”. Each time a single, small pizza was brought out of the oven and placed on the table, guests watched and waited patiently, giving each other the opportunity to enjoy the food. Admittedly, finding the right moment to insinuate myself into the crowd and dig into the communal pizza dish was a challenge; though, happily, I managed to overcome it after only a few rounds of fresh pizza.

This quiet performance going on between and among guests and the pizza chef throughout the evening and alongside the talks seemed to underscore the role of small talk, as well as not talking at all. As curator and author Bonaventure Soh Bejeng Ndikung emphasized during one of the evening’s conversations, not saying anything and instead simply listening together – and, in this case, tasting together – is also a meaningful exchange, a shared experience, a collective encounter.